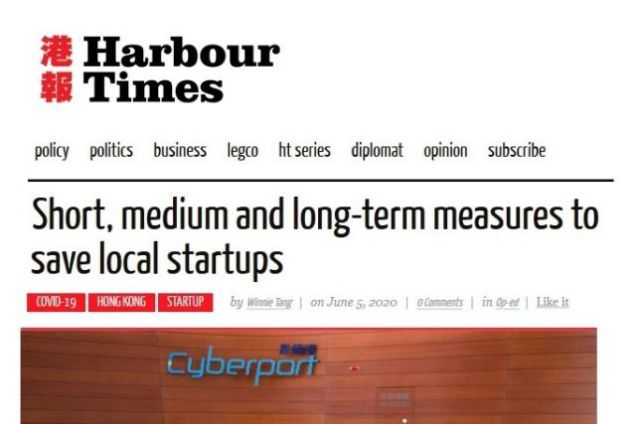 The COVID-19 epidemic cast a deep shadow over the global economy, and the situation startups are faced with is tragic. Startup Genome, a consulting firm, interviewed more than 1,000 startups across 50 countries around the world from March to April, it was found that more than 70 percent of the startups interviewed were forced to lay off employees due to the epidemic.

A survey conducted in Hong Kong in late February also found that nearly 40 percent of startups interviewed had laid-off employees. Even KLOOK, a unicorn that specialises in online travel booking, also laid off staff or asked them to take unpaid leave in April. It is estimated that 100 to 200 employees were affected. Almost all startups are pessimistic about the business environment in Hong Kong, and 20 percent of them are planning to leave Hong Kong.

Since the establishment of the Innovation and Technology Bureau five years ago, it has invested more than HK$100 billion in supporting the innovation and technology ecosystem. According to the statistics of InvestHK, there were more than 3,000 startups in Hong Kong in 2019 constituting an increase of 21 percent compared with 2018. At the same time, there were 12,000 employees in the industry, showing a vigorous development with an increase of nearly 30 percent compared with 2018. Therefore, the government must put significant effort to rescue local startups, so as not to waste their previous investments.

I would also recommend an urgent measure: a five-year interest-free loan to help the startups in this difficult time.

The social unrest last year had considerable impact on the startups. Hong Kong Business quoted figures from the Hong Kong Venture Capital and Private Equity Association that last year’s startup financing in Hong Kong was only HK$9.8 billion, a decrease of 40 percent from 2018.

What about this year? Although Hong Kong tackled the epidemic well, investment bank Morgan Stanley estimates that Hong Kong will be one of the last to recover in Asia due to the poor external environment. It also estimates that the overall economic situation will not return to last year’s level until the first quarter of 2021.

Earlier, the government suggested that tenants and startups in the Science Park, Industrial Village and Cyberport should be granted a six-month rent exemption. In addition to that, the government should consider offering loans, such as a five-year interest-free loan to the startups, in a speedy manner.

The Swiss have showcased their extremely high efficiency in disbursing an emergency loan of CHF20 billion (about HK$160 billion) to small businesses. The loan was launched at the end of March. According to Financial Times, after submitting the one-page application form, the loan can be available after 30 minutes. Just one week after launching, the scheme has benefited over 76,000 companies. The factor enabling such a rapid speed of loan approval is that the government and banks cooperate to use the customer credit information that banks already have, meaning there is no need to add any infrastructure to implement the plan. UBS processed more than 10,000 applications within the first two days.

In contrast, other European countries such as the UK, France and Germany have also launched corporate loan programs, but their implementation efficiency is not satisfactory. For example, the British government received 130,000 enquiries on the first day of the plan, but by the beginning of April, it only processed fewer than 1,000 applications; France and Germany also failed to offer assistance quickly due to system overload or complicated procedures.

Hong Kong should learn from Switzerland’s example; otherwise, it will struggle to disburse the designated funds. In the meantime, high-quality startups, perhaps government investees, will struggle and even fail while the government delays delivering aid. The time to throw a lifeline to those companies is now.